skip to main | skip to sidebar

This week on September 13th we had the world's first ever Koa Day celebration, including not one but two cakes: one improvised by Callie and me, and the other rather more artfully facilitated by Olga. 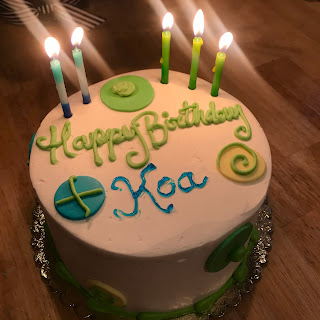 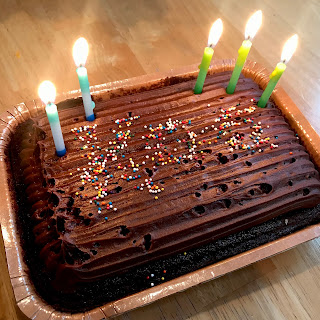 Someone also sent flowers! It was quite a lovely feeling for Koa to be seen/acknowledged/appreciated like this after so many years of my sort of being in the closet about it.

ALSO, and perhaps most importantly, there is now a Koa birthday song! It's just a direct translation of the American song, but still. Unsurprisingly we've got an extra syllable at the start of each line which means we have to start with an 8th note triplet, but it still works:

The syntax here is so straightforward I think we can dispense with the interlinear, but I did want to say something about náute. Since nau means "give birth to, bear," the most accurate translation of "birth" from the point of view of the offspring would in fact be panáute: the occasion of being born, not the occasion of giving birth (way more on that here). In terms of actual usage, though, it's a needlessly granular distinction to have to make...and would throw off the meter even more, so clearly aesthetics are going to have win out here.

It does raise the question, though, of whether it's ever actually a helpful or meaningful distinction -- súsote "kisses given" vs pasúsote "kisses received," -- since all the arguments are represented in the instance being described regardless of which way way around you turn it. My instinct is maybe not, at least in a real human language. Not that it should be forbidden where it happens to add meaning, but also not prescribed.
Posted by Julie at 5:35 PM