skip to main | skip to sidebar

In the almost 15 years since I started keeping this blog I haven't really said anything at all about myself, for the most part because its purpose was process/exploration/documentation and I really never imagined that anyone at all would ever read it! But in case anyone is curious... 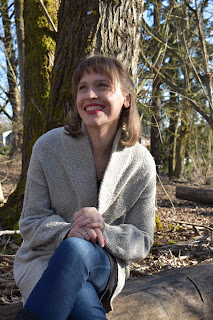 I grew up in Seattle, a child of Polish immigrants on my dad's side and an odd holdout population of rural Swiss-German-speaking Oregonians on my mom's. I've been studying language and linguistics intensively since middle school and started creating languages in isolation quite a long time before I realized there was or had ever been a community of other people with the same strange interest. Around 1996 I discovered the conlang listserv which I can completely unironically say profoundly influenced my art and my life. I went to UC Berkeley for linguistics in the late 90's and early 2000's and later came to the non-profit arts administration career track which is where I still find myself professionally.

My best natural languages other than English are Spanish and Polish, with intermediate and roughly descending fluency in Finnish, Welsh and Catalan; I can fake it in French, German, Russian and, on a good day, Hungarian and Turkish. I'm sort of embarrassed that there's nothing non-IE in there further than a stone's throw from Europe, though there's been a lot of dabbling over the years and I come close to sleeping with my Nahuatl textbook under my pillow these days.

Koa began in my dorm room in 1999, initially out of irritation with Esperanto (ne miskomprenu min -- mi flue parolas ĝin, iam instruis ĝin per DeCal ĉe UCB, vojaĝis per ĝi post la altlernejo, kaj havas pri ĝi multajn varmajn sentojn...sed ankaŭ nombron de, laŭ mi, kompreneblaj plendoj). I found myself wondering how hard it would be to really do better in an IAL: not just philosophically, but as a working system that was genuinely usable as a language. Other initial basic parameters were maximal cross-typological intuitiveness, a minimum of decisions that a learner might find arbitrary, deriving all structures from a small and clearly defined set of first principles, and seeking and destroying any unexamined IE calquing.

As I've discussed recently Koa's original aspirations to IALdom may or may not still hold, but after more than 20 years of continuous development the language is awfully important to me and maybe one the things I'm the most proud of. I really need to write more soon about the philosophy and history of Koa, but it's hard to pull my attention away from the latest crisis in nominalized clauses. Other upcoming projects include a proper bidirectional dictionary, literary texts starting with Are You My Mother? and eventually a thorough reference grammar.

Some other notable constructed language projects along the way include:

* Seadi [`sjæði], my main squeeze in late high school and early college, an ergative and highly emotive artlang with influence from Ancient Greek, Sámi and possibly the spirit of Láadan...this is the only project that had a real world-building story behind it, with multiple dialects and a well-developed system of historical change...there's a blog for it too, but not much on it unfortunately. Not many texts exist, though I did inscribe the inside of my first girlfriend's ring in it: Ciēla sēn ainā inie "may this love between the two of us always endure."

* Oligosynthesis has been a major fascination ever since I ran across Brad Coon's Nova in middle school, but despite an absurd number of attempts I'm still struggling to really get a system off the ground. After something like 25 years of work I finally have a phonology that gives enough roots while being pronounceable and even pleasing in multisyllabic words, but basic morphology is still holding it up. One of these years it's going to really be awesome, though! I can say things like adožíla "clumsy inexplicable love," qearhoju "apathetically drink to destruction," or iveinisui "he ate it with confusion, as if it were the first time."

When not holding a reference grammar, I enjoy singing and playing folk music on tenor guitar and button accordion, exploring the natural world and studying evolutionary biology and philosophy, traveling, cooking, playing games and taking long walks in pretty neighborhoods. I work for a jazz conservatory and live in Portland, Oregon with my partner Olga (who lovingly hounded me for years to write this) and my two daughters.

If you'd like to reach out to talk about Koa, conlanging or anything else, I'd love to chat -- feel free to e-mail! I'm at juliet at hey dot com or @julietabirch on Instagram.
Posted by Julie at 9:57 PM